You will find your answers here!

Sorry, we didn't find any relevant articles for you.

Send us your queries using the form below and we will get back to you with a solution.

Congratulations, you’re coming to Vegas! You’re about to indulge in what 41 million visitors to this neon-laden paradise did last year—unforgettable restaurants, fabulous shows, a cornucopia of shopping and attractions that run the gamut from mild to wild, with myriad options for all budgets. We’ve prepared for your visit with a list of tips you need to know to maximize your fun quotient, avoid wait times and unnecessary expenses. Follow this guide and you'll look like a seasoned pro who has been to the city many times, rather than a first-timer straight off the plane. Now, let the adventure begin!

Pace Yourself & Take Care of Your Body

With all the sunshine and free-flowing alcohol, it's really easy to overdo Vegas. For that reason, it's important to prepare ahead with a few essentials.

First of all, pack a pair of comfy shoes for daytime walking. The strip is 4.2 miles in length, and even just basic sightseeing can take a toll on your feet.

Second, make sure to pack sunscreen and sunglasses and wear them! If you're traveling during warmer months, weather averages over 100 degrees Fahrenheit.

Finally, be sure to drink plenty of water. Whether you're drinking alcohol or indulging in decadent, fancy Vegas meals, it's important to stay hydrated. You don't want medical sickness getting in the way of all your fun!

DISTANCES ARE FURTHER THAN THEY APPEAR

The Strip is four miles long, and because the buildings are so close together, they appear closer than they really are—a two building walk from, say, Bally’s to Planet Hollywood is manageable, but any more than that, and you’ll wear out your walking shoes. 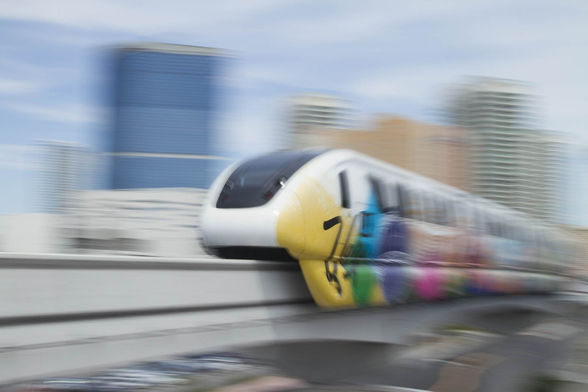 Bonus tip: Use walkways inside and outside the casino, as well as trams and the Las Vegas Monorail to get where you want to go more quickly. For example, you can walk in air-conditioned comfort from Bally’s to Paris, Bellagio to Vdara and Excalibur to Luxor to Mandalay Bay. Or, take the tram between the latter, a tram between Mirage and Treasure Island or the Monorail to seven stops on the Strip.

DON’T BUY DRINKS IN THE CASINO

If you’re going to play slots, video poker or table games, don’t purchase cocktails at a casino bar beforehand—wait until the cocktail waitress approaches you. In an effort to keep you gambling, the casinos offer free cocktails; you may have to wait a little longer for it, but you’ll save money. And if you’re hitting the clubs later, start your drinking on the casino floor so there’s less you have to spend—for any type of performance, even a DJ spinning, you’ll get hit with an additional live entertainment tax. Better to start early!

As with any new travel venue, you’ll get the most out of your Vegas vacation when you familiarize yourself with your surroundings first. After you check in, take a walk around your hotel and casino, and note where the vending machines, restaurants, restrooms and seating areas are. Once you’ve had a rest, it’s time to tackle the Strip—sometimes seeing the sights is overwhelming in itself. To get some insider’s knowledge on the buildings, the history of Las Vegas and more, hop on a Big Bus and enjoy a narrated tour of the city—there are 20+ stops between the Strip and downtown. Our recommendation: stay on the bus for the entire length of the tour before hopping off; this way you’ll be able to makes a note of your must-visit stops and plan your attack. Don’t fear, however—you’ll be able to get back on any bus within a 24- or 48-hour period, depending on the tour length you choose.

It may sound silly, but even in the middle of summer, you’ll want to carry a light jacket or wrap with you—it may be scorching hot outside, but casinos overcompensate by blasting the AC and once inside you’ll be chilled to the bone. But even if you run out without a cover up, you never, ever, want to be without a bottle of water and sunscreen. With so much walking involved on the Strip, you’ll get dehydrated on even a short excursion—you want to keep your fluids up so you can make the most of every day and night! And even if you’re here in fall or winter, the sun still shines brightly (we’ve had record highs this February), so put on the sunscreen before you head outdoors and apply every hour.

The heaviest dinner times in Las Vegas are between 6-8 pm. If you’re flexible, it’s best to try and have dinner between 5-5:30 and 8:30-9 pm, particularly if you are visiting a buffet, as lines can get unmanageable at peak time and the multiple hours you spend in line could have been better served anywhere else! Certainly there will be cases in which dining early or late is simply not possible, but it never hurts to be aware of primetime.

If we had a nickel for every time we’ve heard of some being late to a show or dinner with friends because they didn’t factor in the time it took to wait for a taxi, we’d own a casino by now! In general, you should allow for no less than 30 minutes; bump it up to an hour at the prime dinner times we mentioned above. If you’re leaving a convention, concert, or other event that draws thousands of people, two hours may be a better estimate. However, in those cases, you may want to consider #9 …

Ride-sharing encompasses a few different things in Las Vegas. Sure, it behooves you to ask those in taxi lines around you at the airport or your hotel if they’re going to the same property/near the property you are. If you’re at a convention, they’ll even help you with this. It could also mean taking a shuttle from the airport—your price will be less, but you’ll have to wait as others are dropped off at their destinations as well. Last but not least, if time isn’t a factor and you want an inexpensive way to get downtown, the Strip & Downtown Express (SDX) bus picks up at points along the Strip and take you to its end destination, the Las Vegas Premium Outlets North, and other hotspots downtown.

Still can't find
what you are looking for?